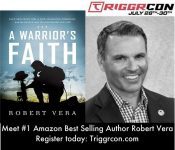 #1 Amazon Best Seller: An exhilarating story of a young Navy SEAL from Issaqua Washington whose relentless faith transformed his life and inspired everyone who knew his courageous story. In A Warrior’s Faith, Ryan Job’s close friend, Robert Vera, recounts how the highly decorated Navy SEAL’s unstoppable sense of humor, positive attitude, and fierce determination helped him survive after being shot in the face by an enemy sniper on a roof in Ramadi, Iraq. Though blinded, the irrepressible Job recovered from his wounds and began facing a new set of obstacles with his characteristic humor and resolve. He hunted elk, … Continue reading 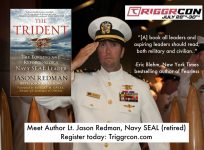 Decorated US Navy SEAL Lieutenant Jason Redman was critically wounded in 2007 while leading a mission against a key al-Qaida commander when his mobility and assault forces team was ambushed and he was struck by machine-gun fire at point-blank range. During the intense recovery that followed, Redman gained national attention after posting a sign on his hospital door that went on to become a symbol for wounded warriors everywhere. In this inspiring account, he speaks candidly of his SEAL career and the extraordinary devotion of his wife and family, without whom he would not have survived. Vivid and emotionally resonant, … Continue reading 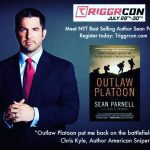 NEW YORK TIME BEST SELLER: A riveting story of American fighting men, Outlaw Platoon is Lieutenant Sean Parnell’s stunning personal account of the legendary U.S. Army’s 10th Mountain Division’s heroic stand in the mountains of Afghanistan. Acclaimed for its vivid, poignant, and honest recreation of sixteen brutal months of nearly continuous battle in the deadly Hindu Kesh, Outlaw Platoon is a Band of Brothers or We Were Soldiers Once and Young for the early 21st century—an action-packed, highly emotional true story of enormous sacrifice and bravery. A magnificent account of heroes, renegades, infidels, and brothers, it stands with Sebastian Junger’s … Continue reading

Rich Peters, Navy SEAL, Original Member of SEAL Team Six, Co-Author, Man of War Richard Peters is a retired United States Navy SEAL. He has been trained as a diver, explosives and munitions expert, a fixed wing ATP and rotary wing pilot. He has survived 4 airplane crashes and 1 helicopter crash.  He was one of the original founding members, a PLANKOWNER, of SEAL TEAM 6, the military’s elite counterterrorism unit, where he severed for nearly 14 years. In 1969, he was a 20-year-old newly minted Navy SEAL and a member of SEAL team 2 when he arrived in Vietnam … Continue reading 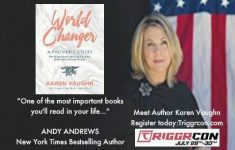 On August 6, 2011, thirty American soldiers aboard Extortion 17 perished in the single greatest loss of Navy SEAL lives. Among them — Aaron Carson Vaughn, a small-town boy who grew up in the hills of Tennessee and lived a life larger than most. Told through the eyes of Karen, Aaron’s mother, this tender story of faith, family, and love grips the heart and shows how one family raised an American warrior filled with courage, tenacity, and patriotism. The Vaughn’s story is not one about war or about a grieving family, but rather one of triumph and God’s sustaining grace. … Continue reading

On April 21, 2017 U.S. Army Second Lieutenant Joshua Mantz died. Killed by a sniper on the streets of Baghdad, he flatlined for 15 minutes. But the medics would not give up on him, and he would not give up either. He literally came back from death. Even more astounding, his brain was fully intact. He remembered everything. However, while Mantz may have cheated death and gone on to be a cable news celebrity, he tells in detail of the unseen damage of war and death. The Beauty of a Darker Soul, a book dedicated to helping people overcome emotionally … Continue reading 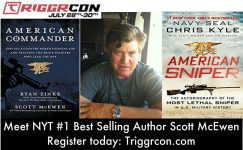 #1 NEW YORK TIMES BESTSELLING AUTHOR Scott McEwen lives in San Diego, California, where he began writing while practicing law. He grew up in the mountains of Eastern Oregon where he became an Eagle Scout; hiking, fishing, and hunting at every opportunity presented. He obtained his undergraduate degree in Oregon and thereafter studied and worked extensively in London, England. Scott works with and provides support for several military charitable organizations, including the Seal Team Foundation. Scott’s interest in military history, intense patriotism, and experience with long-range hunting rifles compelled him to accurately record the battlefield experiences of Chris Kyle, the … Continue reading

NEW YORK TIMES BESTSELLER. Jay Dobyns, the first federal agent to infiltrate the inner circle of the outlaw Hells Angels Motorcycle Club, is the inside story of the twenty-one-month operation that almost cost him his family, his sanity, and his life. Getting shot in the chest as a rookie agent, bartering for machine guns, throttling down the highway at 100 mph, and responding to a full-scale, bloody riot between the Hells Angels and their rivals, the Mongols–these are just a few of the high-adrenaline experiences Dobyns recounts in this action-packed, hard-to-imagine-but-true story. Dobyns leaves no stone of his harrowing journey … Continue reading

A graduate of the University of California at Santa Cruz, Greg Amundson spent over sixteen years in Military and Law Enforcement service to include details as a Special Weapons and Tactics Team Operator (SWAT) and Sniper in Santa Cruz County, a Captain in the United States Army, a Special Agent with the Drug Enforcement Administration (DEA) on the Southwest Border and an Agent on the highly effective Border Enforcement Security Taskforce (BEST) Team. In addition to his extensive government work, Greg is a highly recognized and admired Coach in the CrossFit community. A former owner of the very first CrossFit … Continue reading